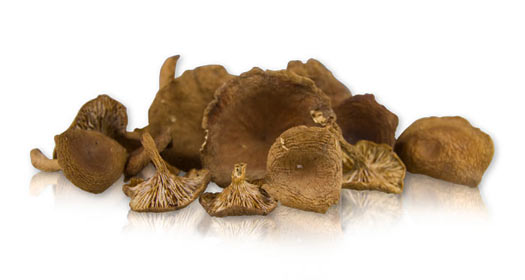 Candy Cap mushrooms (aka curry milk cap mushrooms) are an unusual and exotic wild mushroom variety that is often used to make mushroom desserts. Yes, desserts!  Their flavor and aroma are intense: sweet and musky with a pronounced maple note.  Though they’re one of the pricier wild mushrooms, the amount you use for most recipes is much less than varieties like dried morels or dried porcinis.

How to Use Candy Caps

The two most common methods for extracting the flavor from candy caps are steeping and grinding, but some chefs also reconstitute them.  Each of these three methods offers different flavor and textural benefits, so you’ll want to pick the one that best suits your recipe.  Be careful not to use too many candy caps, they’re extremely potent and can overrun other flavors in your dish if you’re not careful.

Steeping candy cap mushrooms in milk or cream is the method pastry chefs often use for imparting their flavor to ice creams, panna cotta (check out our candy cap panna cotta recipe) and chocolate ganaches.  Steeping is easy and requires no special equipment.

Pros: Imparts flavor without changing textures or significantly increasing volume (so most recipes don’t have to have other ingredients adjusted for freezing, gelling, or baking chemistry/physics to work)

Cons: We’ve found that while most of the candy caps’ flavor is infused through steeping, the maple note doesn’t appear to transfer into dairy mixtures, so either keep that in mind or add additional ground candy caps directly to the recipe to compensate.

You can grind dry candy caps either into pure candy cap powder or a flavored sugar blend.  Use a motorized spice or coffee grinder.

●  When used to dust finished plates, adds visual flair similar to dusting with cocoa powder.
●  Offers perhaps the purest, most potent flavor of all candy cap preparations.
●  Very efficient use of your candy caps, a little candy cap powder on the surface adds a LOT of flavor.
●  Preserves the maple flavor and aroma that can be lost during steeping.

●  Could make some recipes gritty.
●  Very hard for diners to ignore, and not everybody likes mushroom desserts.
●  Particularly easy to overpower other ingredients if you’re not careful.
●  The grinder needs to be very thoroughly cleaned afterwards, or else everything you grind in it for a while will smell and/or taste like candy caps (which isn’t necessarily a bad thing).

Grinding Instructions:
Read the coffee grinder section of how to grind whole spices for the basic technique and cleaning tips.

Though it’s the least commonly used technique, you can reconstitute dried candy caps as you would any other dried wild mushrooms and add them to dishes either whole or chopped.

We don’t have a lot of experience with this method, so we aren’t sure how the candy cap flavor is effected, but this might be another option.  Let us know how it goes.