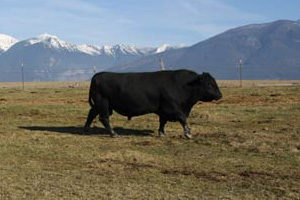 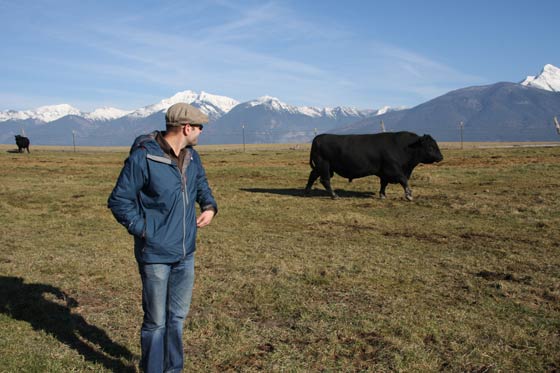 Does he poop truffles or gold-plated cow pies, you must be asking? Nope. I can actually tell you this authoritatively. Let’s just say that this city slicker didn’t do such a good job avoiding the land mines yesterday. Now I know the real reason why cowboy boots don’t have treads.

Is the meat that good? Actually, yes…but it’s not his meat, per se. It’s the meat that his sperm creates that makes him so valuable. He’s the #4 rated bull in the world in terms of beef genetics. And, the quality of the beef is all about genetics. Excellent genetics = excellent beef.  There are a dozen or so genetic markers for tenderness and marbling.  And, this bull has them all.

Look at the marbling on the grass-fed strip steak below. It looks more like kobe beef than grass-fed beef. 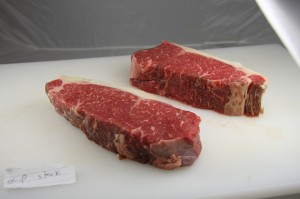 Anyway, sorry to burst your bubble, but almost all of the meat that we eat is the result of artificial insemination. And, beef sperm is a big market. The bull in the picture above has hundreds of thousands of offspring all over the world.

Here’s how the birds and bees work in the animal agriculture world. Unlike our recipe posts, I’m not going to provide step-by-step photos (but, only because I don’t have them):

The rancher decides when he wants to impregnate the cows. Usually they will time it so that they give birth in the Spring.

The cowboys corral the female cows and insert a estrogen tampon to stop the cows from cycling. (I know…it sounds crazy and gross … but so did the opposite sex the first time your parents told you about the birds and the bees, right?) When they are ready to impregnate the cows, they remove the estrogen tampon.

3 days later, the cows ovulate and the cowboys inject the sperm.

Apparently, this works about 65% of the time. Of course, they don’t know immediately which cows are pregnant. So, when they release the cows back onto the pasture, they also release a group of “range bulls” whose job it is to spend the next few months grazing the mountains and impregnating the rest of the herd.

Now, that big ‘ol $1 Million bad ass bull is a stud, no doubt. But, if I had to be a bull, I’d rather be a range bull any day of the week … roaming the Montana mountains and makin’ natural luv! Wouldn’t you? 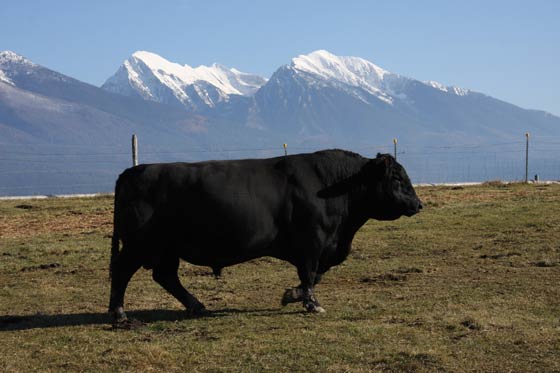