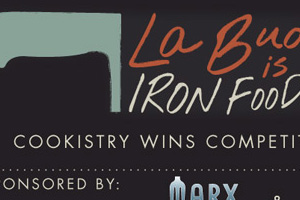 25 food bloggers entered the arena to do battle and vie for the ultimate title, each using their chosen weapons: three of the following surprise ingredients: Dulse Seaweed, Fennel Pollen, Bourbon Vanilla Beans, Maple Sugar, Dried Porcini Mushrooms, Tellicherry Peppercorns, Smoked Salt and Aji Panca Chilies.  Now the dust has settled, and judgment is upon us.

Iron Foodie competitors, we stand here awed by your creativity, skill, and drive to challenge yourselves.  Collectively you baked, broiled, roasted, confit-ed, churned, grilled, brulee-d, and marinated your way to a whole new level, submitting some of the most impressive recipes we’ve yet seen in Marx Foods competitions.  You truly are an impressive bunch, and are to be commended.

In the end though, there can only be one Iron Foodie 2010…no matter how many of you we’d love to crown.

When the call to culinary battle came, La Buona Cucina rolled up her sleeves and made a Timpano.

Previously, we’d imagined timpanos to be creatures of myth and legend…not actually to be consumed (much less made) by human beings, but held on a pedestal until a deity worthy of their consumption wandered along.

Homemade meatballs and three distinct layers of pasta and sauce, all baked into a giant, drum-like crust…it’s a stunning achievement, and with 204 votes to her name, clearly we were not the only ones impressed.  With her title and bragging rights, Ann also receives a $200 credit to the Marx Foods store.  If you haven’t seen it already, be sure to check out her Timpano Recipe!

However, there are also several other winners.  While bloggers were jockeying for position in our reader poll, a secret, quieter ballot was making its way amongst the competitors, for who else could understand the blood, sweat, tears and hours that went into the creation of recipes of this stature?

Along with the admiration of her fellows, Donna will also be receiving a $200 credit to the store.  Be sure to check out her delectable dessert. “What is it?” you may be wondering.  Oh nothing…just brown butter vanilla bean ice cream and butter-toasted pecans with a maple sugar smoked salt topping.

What are you still doing here?  I know, you just got back from drooling at the Timpano-of-the-Gods, but who cares!  Go check her recipe out right now!

Be sure to visit the Iron Foodie 2010 recipe post to see ALL the submitted recipes!

Stay tuned to the Marx Foods blog!  In the new year we’ll be holding a truly massive recipe challenge: The Ridiculously Delicious Challenge.  A giant, multiple tier contest pitting a field of both blogging and non-blogging home chef competitors against each other.  As an additional prize, all four of these winners will be eligible to compete in the Ridiculously Delicious Challenge if they so choose.