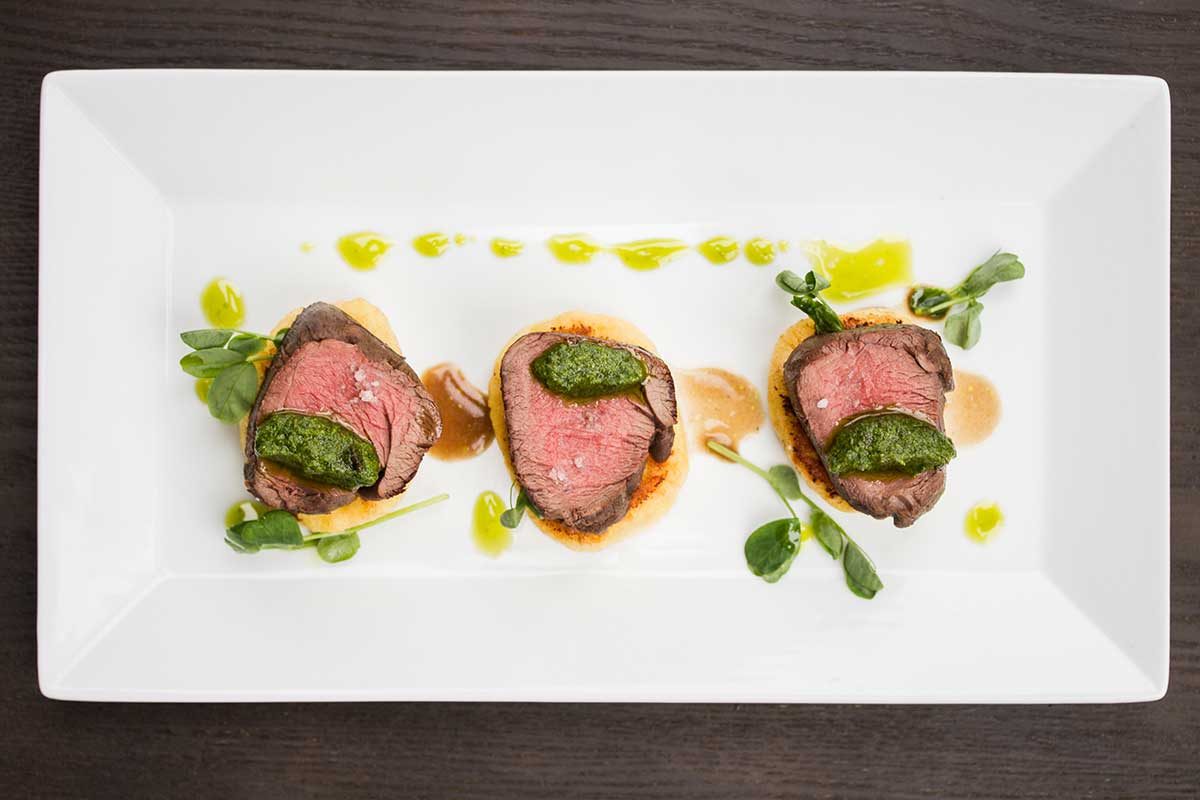 1
Preheat your oven to 400°F.
2
Poke holes in the russets on all sides with a fork. Roast them until tender & dry (1 ½ hours).
3
Trim the silverskin from the tenderloins (how to remove silver skin).
4
Cut 6” lengths of twine and tie the tenderloin with each length in a loop, 2” between each loop, pulling each one taut to compact the meat and pull all trailing sections into the body of the tenderloin.
5
Scrape the inside of the potatoes out of their skins, then run them through a ricer or a food mill.
6
Combine the riced/milled potatoes with the egg yolks & salt in a bowl. Mix to combine.
7
Add ¼ cup of the cake flour to the bowl and very gently mix it in.
8
Turn the dough out onto a cutting board and gently roll it into a 2” thick cylinder in the remaining flour. Slice it half inch thick disks. Pat each disk with a little of the flour.
9
Bring a pot of salted water to a boil. Add the dumplings in batches, simmering until they float to the surface. As each dumpling floats, remove it from the water with a slotted spoon.
10
Follow the recipe.
11
Pour the salsa verde into a strainer, reserving both the sauce and the oil that runs out.
12
Put a skillet on the stove over medium heat. Add the 2 tablespoons of butter and the high heat oil. When the butter has melted and stopped foaming, add the dumplings, cooking until they’re browned on one side. While they’re cooking, sprinkle them with a bit of salt.
13
Once the dumplings have browned on one side, remove the skillet from the heat and flip each dumpling browned-side-up.
14
Get the high heat oil hot in a different large skillet/frying pan over high heat. Add the tied tenderloin and sear it on all sides to an internal temperature of 125-130°F (rare-medium rare).
If you’re concerned about reaching the right doneness without overcooking the outside of the tenderloin, you can move it to a 400°F oven after a quick sear and roast it the rest of the way.
15
Remove the tenderloin from the pan, cut the twine off, and let it rest, loosely covered with foil on a clean plate.
16
Make the Pan Sauce: Deglaze the pan you cooked the tenderloin in with the stock and red wine. Simmer the mixture down.  Add the juices from the resting plate and continue to simmer until you’re left with about a quarter cup of liquid.
Remove the sauce from the heat and swirl in the remaining tablespoon of butter and the sherry vinegar.
17
Slice the tenderloin into medallions, and put one medallion on top of each dumpling on plates.
18
Top each medallion with some of the salsa verde and some of the pan sauce.
19
Optional: Garnish the plate with microgreens.
20
Drizzle the plate with a little bit of the salsa verde oil.
Browse More:
Venison Recipes