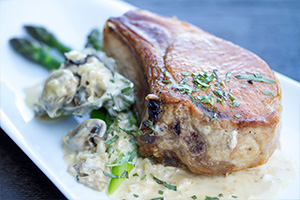 1
Preheat your oven to 350 degrees.
2
Shuck the oysters. Store them in their liquid in the fridge until you need them.
3
Optional: If you wish to use the oysters as a decorative bowl for the oyster sauce, boil them to sterilize them, remove them from the water, let them cool, then scrape them clean.
4
Bring a pot of well-salted water to a boil. Add the asparagus and blanch it for three minutes. Remove the asparagus from the pot and immediately plunge it into an ice water bath to shock it.
5
Season the pork chops with salt and pepper on both sides. Sear them in a hot, oiled, oven-safe frying pan until browned on all sides.
6
Move the frying pan to the oven & roast the pork chops to an internal temperature of 145.
7
Remove the cooked pork chops from the pan to a clean plate to rest.
8
Drain the excess fat from the pan. Add the shallot and sweat it over low heat, just until it starts to turn translucent and soften. Deglaze the pan with the white wine.
9
Drain the liquid from the oysters. Cook the wine & shallot mixture until the wine evaporates. Add the oyster liquid and the heavy cream. Simmer to thicken to a sauce consistency (actually slightly thicker, in this case, than the traditional “coat the back of a spoon” consistency).
10
Stir in the oysters and the Dijon mustard. Continue to simmer until the oysters are cooked.
11
Plate the pork chop (whole or sliced) with the chilled asparagus and oysters in sauce. Sprinkle the chop with some of the minced tarragon. Serve.
Browse More:
Kurobuta Pork Recipes
Chop Recipes
Oyster Recipes