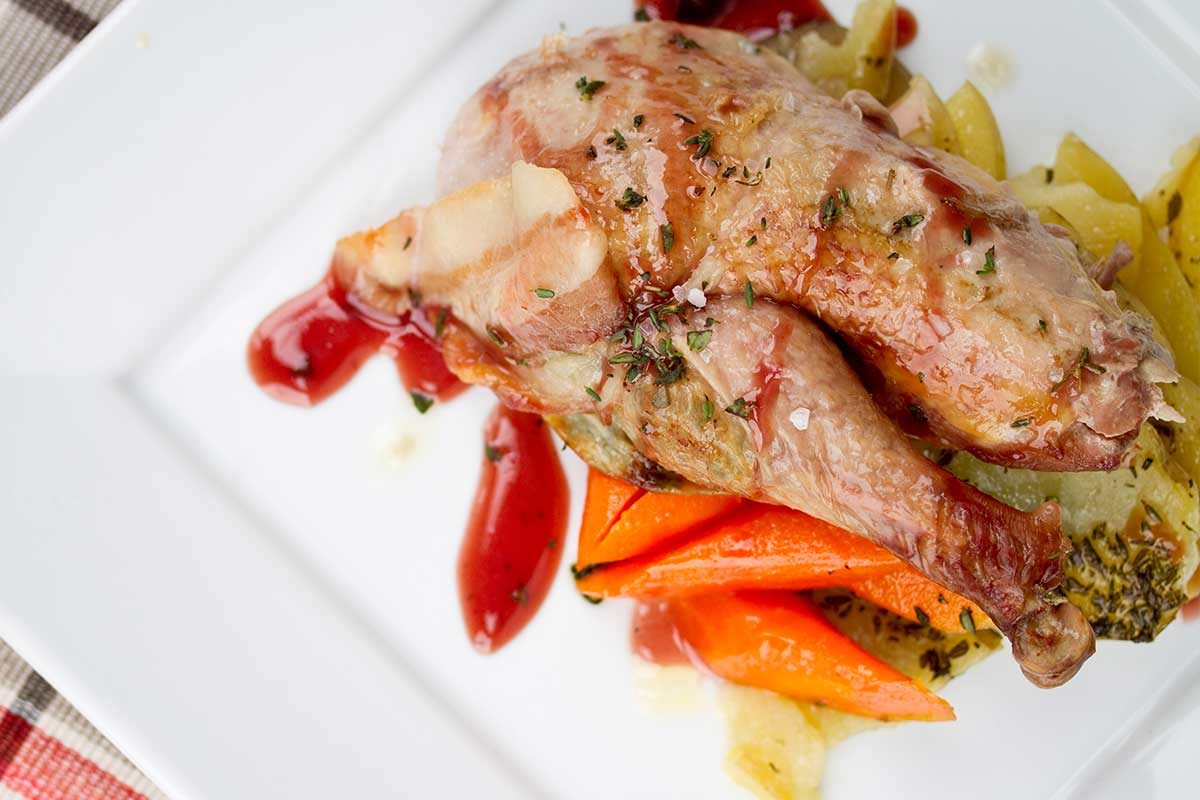 This pheasant is kept extra moist, rich and delicious by wrapping it with bacon prior to roasting, inserting thyme butter under the skin and roasting it at several different temperatures. Here we’ve paired it with a thyme & port wine sauce, carrots Vichy & potatoes savoryarde. 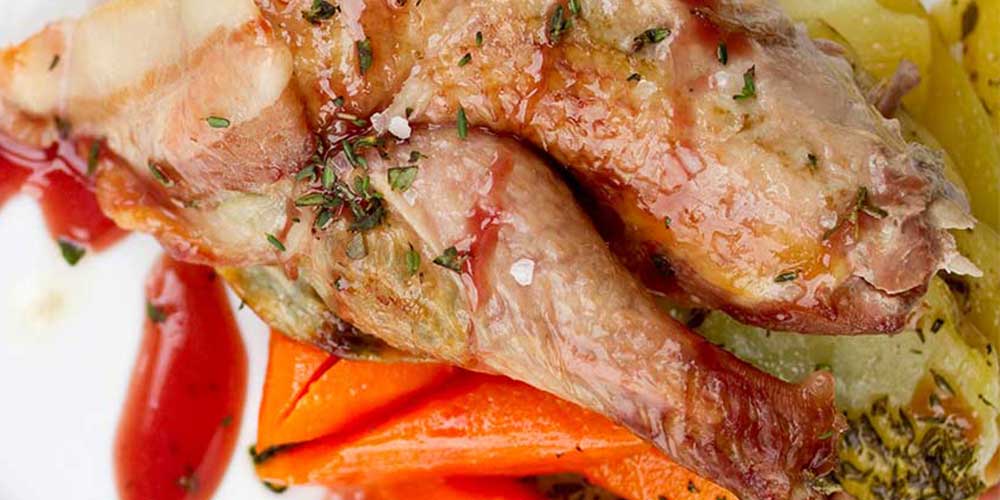 1
Preheat your oven to 450 degrees.
2
Line a large roasting pan or baking dish with a large sheet of foil (enough to cover the bottom and fold over the bird).
3
Mash or knead together the butter, thyme leaves and salt.
4
Gently push your fingers under the pheasant’s skin and lift as much of the skin away from the body as possible without breaking it.

Divide the butter into four large pieces and insert them under the loosened skin. Use one fourth for each leg and one for each breast.

5
Push the bay leaves under the skin, one over each breast.
6
Tuck the wing tips under the breasts & lay the strips of bacon over the top to cover all the breast and leg meat (see how to truss poultry for photos).
7
Truss the bird. After trussing, thread the thyme sprigs into the topmost twine loop.
8
Lay the bird into the foiled dish. Cover it with a small piece of parchment paper, then fold the foil over the top to cover completely.
9
Move the covered bird to the oven and roast for 20 minutes.
10
Reduce the oven temperature to 350 degrees. Roast for an additional 20 minutes.
11
Remove the pheasant from the oven and fold back the foil, discarding the parchment paper. Return it to the oven & roast until the meat reaches an internal temperature of 160 degrees.
12
Switch the oven to broil. Broil the pheasant until it is golden brown.
13
Remove the pheasant from the roasting pan and let it rest. Drain off the pan juices into a small dish and put it in the fridge until the fat rises to the surface and solidifies.
14
Discard the fat. Move the jellied juices to a frying pan and add the chicken stock. Bring to a simmer until it has reduced by half.
15
Add the red current jelly and the port to the chicken stock mixture.
16
Optional: If using low-gelatin (store bought) chicken stock, make a slurry with 1tbsp of cornstarch and 1 tbsp chicken stock. Add the slurry to the sauce.
17
Simmer until the sauce coats the back of a spoon. Stir in the thyme & take the sauce off the heat.
18
Cut the twine off the pheasant. Carve the pheasant, discard the bay leaves, & serve with the port sauce and your choice of sides. The bacon can be served with the pheasant or you can discard it (as we did) for a lighter dish.
Browse More:
Pheasant Recipes
Poultry Recipes