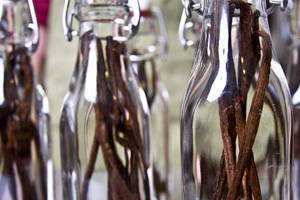 Vanilla contains a lot of alcohol-soluble flavors that are commonly drawn out to make vanilla extract.  Making homemade vanilla vodka is easy and a great way to bring the calming and flavor-enhancing properties of vanilla to your mixed drinks.

A note on which beans to use: though either variety of vanilla bean can be used, the one you choose can affect the flavor of your finished alcohol.  Tahitians tend to be fruitier and more aromatic, while bourbons have a richer, deeper flavor.

1.  Pour the vodka into your container.

2.  Add vanilla beans.  Using whole beans will infuse flavor into your alcohol while leaving the beans intact for later use.  Splitting one or more beans down the middle (we like to split at least one) will speed the flavoring process, but likely keep you from reusing that bean (how to scrape a vanilla bean).

3.  Close the jar or bottle and let it sit in a cool, dry place for 2-3 weeks (we recommend writing the date you made it on the outside, so you’ll remember when to test).

4.  Taste your vodka periodically to see if it’s to your liking.  Once your desired strength has been reached, remove the vanilla beans and either use them in something else, or put them in another container of vodka to make more (though the second batch may take longer or end up weaker).

Variations:
• Try using a different alcohol: bourbon is a common choice because of the vanilla-like compounds it already naturally contains.
• Make vanilla simple syrup instead:  Steep scraped vanilla pods in simple syrup for another way to bring vanilla into your mixed drinks.  This method has the added benefit of being useful in non-alcoholic applications (how to make simple syrup).