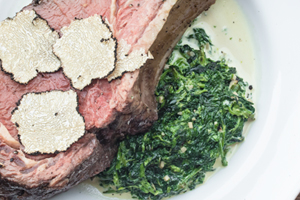 Proper creamed spinach is a wonderful thing…make it with nettles and you’ve got something even more special. Either way, adding fresh black truffles takes it over the top into fine dining territory.

We used Italian black summer truffles when developing this recipe (which are the most readily available variety during nettle season), but it’d be even better with Perigord or Burgundy truffles.

Wash the spinach thoroughly in a sink full of water to remove any dirt & grit. Remove from the water & use a salad spinner to get as much water off of the leaves as possible.