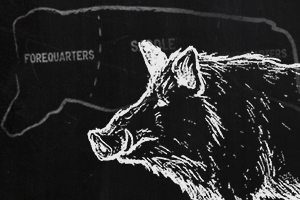 This part of whole wild boar butchery guide focuses on splitting the hindquarters into two halves, the last step before processing them into various cuts.
Splitting the hindquarters is a little more complicated than splitting the forequarters because of the caudal (tail) vertebrae, which are much smaller than the other vertebrae and can splinter if you try to cut straight through them with a hand saw. Because of this, it’s recommended that you actually split the forequarters at an angle, so the saw misses the smallest bones.

This technique will require a sharp boning knife and either
a) a heavy cleaver and a hand saw.
b) a band saw.

Because you no longer have the rest of the boar attached to act as a counterweight, an extra set of hands will be extremely helpful if you’re not using a band saw.
Here’s how you do it: