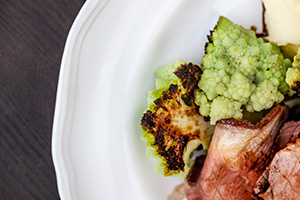 1
Preheat your oven to 350 degrees. Thinly slice the garlic clove.
2
Cut slits into the roast (evenly dispersed across all surfaces) and insert the slivers of garlic.
3
Season the roast on all sides with the truffle salt.
4
Get an oiled, oven safe pan on the stove and sear the roast on all sides until it’s browned.
5
Put one bay leaf below the roast and one bay leaf on top. Move the pan to the oven and roast to an internal temperature of 115-120 degrees (for medium rare after the rest).
6
Simmer the parsnips in the water, with the bay leaf, until very tender.
7
Drain the water off the parsnips & remove the bay leaf. Blend the parsnip chunks in a food processor until they’re a very smooth puree.
8
Heat the heavy cream on the stove. Put the parsnip puree in a pan. Stir in the cream and butter.
9
Taste & add salt to taste (we added 2 tsp). Finish by mixing in a few drops of truffle oil.
10
Cut the romanesco heads in half (from the top down through the stem). Caramelize them, cut side down, in a pan on the stove with melted butter.
11
When the roast has cooked, remove it from the oven and the pan to a clean plate to rest (loosely covered with foil). Cut off any twine or netting & remove the bay leave(s).
12
Drain off the excess fat from the roasting pan. Deglaze the pan with the red wine, scraping the browned bits off the bottom of the pan, into the sauce. Simmer to reduce the wine by at least half. Add the heavy cream, then remove the pan from the heat and stir in the butter. Add the capers.
13
Thinly slice the roast and serve it with the caramelized romanesco, parsnip puree (we made quenelles) and the pan sauce.
You’ll (probably) have leftover roast, depending on your appetite…which means roast beef sandwiches later!
Browse More:
Grass-Fed Beef Recipes
Roast Recipes
Truffle Product Recipes