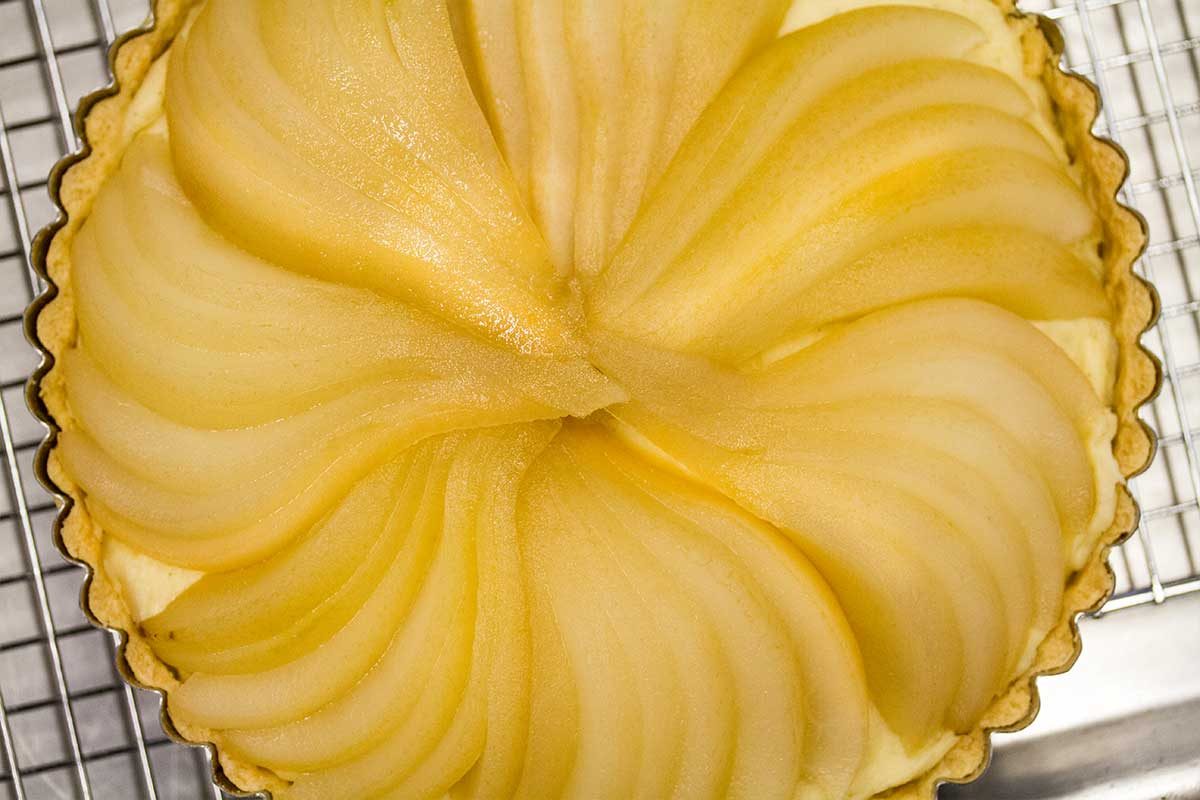 Delicate tea-poached pears atop rich vanilla-maple pastry cream, topped with a bourbon-infused caramel sauce. This elegant dessert has several components, but many of them can be made ahead of time.

In addition, this tart dough recipe is very forgiving. It naturally has a bit of a crumbly texture, but if it tears, you can patch it without worry. 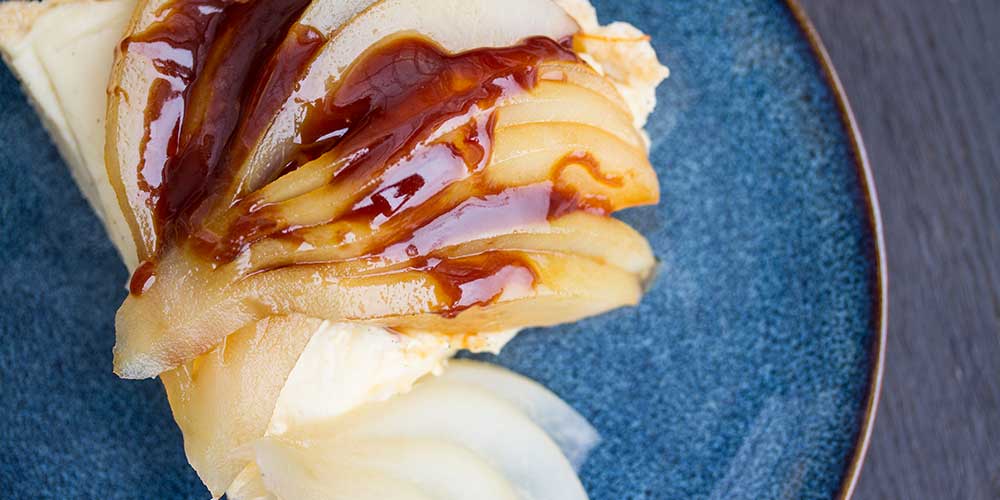 1
Peel the pears using a vegetable peeler, using long strokes following the curve of the pear.
2
Combine the 2 cups of water and the cup of white wine in a deep pot. Add the sugar & shagbark syrup. Bring the mixture to a boil, whisking occasionally to dissolve the sugar.
3
Cut a disk (cartouche) large enough to fit in the mouth of the pot, but cover the contents, from parchment paper or paper towel.
4
Quarter (cut them lengthwise) & core the pears.
5
Put the tea in a teabag or infuser (in a pinch you can add it loose and strain the poaching liquid) and add it to the poaching liquid once it’s reached a boil. Steep the tea for 3 minutes, then remove it.
6
Add the pears. Cover the mixture with the paper disk (to keep things submerged) and poach the pears over low to medium heat until they come to a boil. Boil for 3 minutes, then remove the pot from the stove and let the pears cool in their liquid.

If poaching the pears ahead of time, let them cool, then store them in the refrigerator in their poaching liquid until you need them (up to a week).

7
Combine the flour, salt, sugar, and cubed butter in a large bowl. Mix them together using your hands or a dough paddle, breaking up the butter, until the texture is sandy with small clumps of flour-coated butter.
8
Add the egg yolks to the bowl and stir them in.
9
Pour the dough mixture out onto the counter and work the eggs’ moisture through the dough by pressing the dough against the counter with the heels of your hands to smear the egg and butter through the flour. Continue until the dough has turned a uniform yellow and has a uniform moist texture.
10
Press the dough into a disk, wrap it in plastic wrap, and refrigerate it for 30 minutes.
11
Unwrap the dough and turn it out onto a floured surface. Use a rolling pin (or a bottle in a pinch) to roll it out into a large disk just under ¼” thick.
12
Gather the disk of dough around the rolling pin, and lift it into the tart pan. Gently press the dough into the pan to fill all the space (without breaking it). Press the dough down past the fluted edges to cut it and get a uniform crust.
13
Move the tart pan to the fridge or freezer until you’re ready to bake it – at least 30 minutes (up to 3 days).
14
Combine the sugar with 2 tbsp of water (give or take…you’re looking for a wet sand consistency) in a large pot over high heat.
15
Boil (without stirring…you can swirl the pan) until the sugar turns a rich brown, then swirl in the bourbon and heavy cream. Remove the pan from the heat and let it cool.
16
Soak the gelatin in enough cold water to cover until hydrated (bloom it).
17
Put the heavy cream in a small pot over high heat to scald the cream (heat it just until it starts to steam).
18
While the cream is heating, scrape the seeds from the half vanilla bean and add them to the pot.
19
In a separate bowl, whisk together the egg, egg yolks, sugar and corn starch. Add the salt, maple syrup, and maple cream, then whisk to combine.
20
Fill a large bowl with ice water, then put a smaller bowl with a strainer in it (for straining & chilling the pastry cream)
21
Temper the egg mixture into the hot cream, then whisk the mixture constantly to keep the heat even throughout the liquid. Heat just until it starts to bubble (when the cornstarch will thicken).
22
Strain the pastry cream into the bowl in the ice bath, pressing it through the strainer with your whisk. Whisk the mixture over the ice
to cool it below the boiling point.
23
Whisk in the gelatin in two batches (1/2 at a time). Then whisk in the butter. Let the mixture sit briefly (for the butter to finish melting in), then whisk again.
24
Preheat the oven to 350 degrees.
25
Remove the tart shell from the fridge/freezer. Put a layer of parchment paper in it and fill the center with a layer of dry rice (you could also use dry beans or pie weights, but we think rice gives a more uniform surface).
26
Bake the tart crust for 20 minutes, then remove it from the stove and take out the rice/beans/weights & parchment paper. Bake for an additional five minutes to brown the bottom.
27
Remove the crust from the oven and let it cool for about ten minutes.
28
Spoon the pastry cream into the crust and smooth it down with an offset spatula. Use enough pastry cream so that it comes up to just below the crust.
29
Drain the poaching liquid off of the pears (save it!). Cut the pear quarters into fans (thin slices, cut most of the way through) and lay them out across the top of the pastry cream in the tart.
30
Remove the tart from the tart pan using the removable bottom. Drizzle the top with the caramel.
31
Serve, drizzling each slice with additional caramel if desired.
32
If you have any pears left, use them on ice cream, yogurt, etc.
Browse More:
Cake, Cookie & Pie Recipes
Fruit Dessert Recipes
Shagbark Syrup Recipes