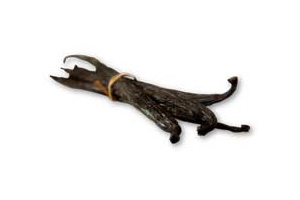 – Vanilla beans come from orchids
– The flowers must be pollinated within one day of opening
– Commercial vanilla orchids are hand pollinated
– The most commonly used beans are Bourbon Vanilla Beans & Tahitian Vanilla Beans
– Like salt, vanilla contains compounds that enhance other flavors, even if there isn’t enough of it in a dish to impart a noticeable vanilla flavor.
– Vanilla beans have to cure for 3-6 months once they’re picked, then dry for several more.
– Artificial vanilla flavoring is a wood/paper industry byproduct
– Some woods contain vanillin compounds, which steep into alcohol stored in barrels made from them, which is how some alcohols develop “notes of vanilla”.
– Vanilla beans dry out very easily, and so should not be kept in mostly empty jars (as you see them in the grocery store).
– Properly stored (air tight), vanilla beans will last for at least a year.
– Vanilla’s scent is generally believed to have a calming effect.
– Vanilla was once considered an aphrodisiac.

More Vanilla Information:
How to Use a Vanilla Bean
Vanilla Recipes