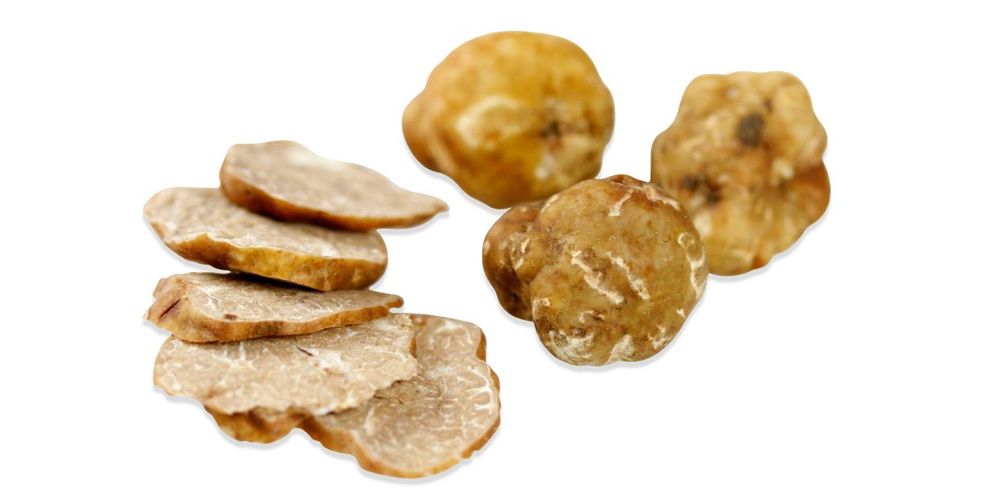 HOW TRUFFLE OIL IS MADE

Most truffle oil producers are more secretive about their methods than champion barbeque pit masters, but here’s what is known to be true:

The idea behind truffle oil is to enable people to enjoy truffle flavor without using fresh truffles. There are two reasons for this: A) truffles are rare, and B) infusing truffles into oil doesn’t provide reliably potent results.

A few truffle oils DO contain truffles, but only tiny pieces included for (frankly) labeling and mystique reasons. They don’t actually give the oil its flavor. Because of this, most truffle oil on the market today (if not all truffle oil) is produced in laboratories. Don’t immediately assume that’s a bad thing, let us explain.

BUILDING A TRUFFLE WITH MOLECULAR GASTRONOMY

If you were to use a bunch of expensive lab equipment on a fresh truffle to map out the flavor and aroma components that make truffles smell and taste like truffles, you’d end up with several identified compounds (the most well-known is 2,4-dithiapentane). For the purposes of maintaining your sanity, we’ll say the number of compounds is four and call them A, B, C and D.

The key is that though this specific combination of compounds in nature is unique to truffles, individually those compounds can also be found elsewhere. With skill and the right equipment, one can harvest them from other things and combine them to make truffle identical essence/aroma. This is what the labs do in truffle oil production.

Once the truffle essence/aroma has been made, it must then be carefully infused into the oil. Different producers use different oils. Olive oil is traditional (and the most widely used). We aren’t big fans of extra virgin oil, as it can compete with the truffle flavor. High quality, but neutral olive oil bases are what we recommend, or sunflower oil, which has a completely neutral flavor and the added benefit of being cheaper than olive oil.

Although truffle oil is by its very nature a manufactured product, the key distinction lies in where those puzzle-piece-compounds come from.

How Can You Tell Which is Which?

Unfortunately, truffle oil label law is complicated, allowing most producers to be extremely vague about the origins/creation of their oils and use terms that imply authenticity, but don’t mean what you’d think. It can be extremely difficult to track natural varieties down (it took us months!).

For more reading about truffle oil creation, we recommend Daniel Patterson’s excellent NYTimes Story “Hocus-Pocus, and a Beaker of Truffles”.