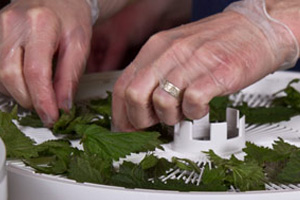 Fresh stinging nettles are only in season in the spring, which means that if you want to enjoy them and their nutritional benefits year round you need to preserve them.  Much of the below is inspired by a recent foraging trip led by Langdon Cook.  Thanks, Langdon, for making our life a little more delicious.

Here are the methods we recommend:

Blanch, shock, and wring out your nettles as you normally would before cooking with them (see how to prepare nettles for details), then freeze them in zip top bags as you would cooked spinach.  We like to chop ours prior to freezing, because it makes for less work later (unchopped nettles can be stringy when cooked), but you could also chop after thawing.

Turn your nettles into pesto using our nettle pesto recipe, then portion that pesto in ice cube trays. That way it’s easy to thaw just as much as you want later on.  Once the cubes have frozen, move them into a zip-top bag in your freezer for long term storage.

You have to blanch nettles anyway before eating them, and the left over blanching water can be used as a vegetarian stock.  Freeze it and use within a year.

If you just want to make nettle tea later, first give the leaves a rinse and pat them dry (avoid touching them with bare skin).  A salad spinner would work even better.

Wear gloves and lay each leaf out in the dehydrator tray so it isn’t touching the others for best drying quality and speed.  Set your dehydrator to 115 degrees and dry them until brittle (ours took roughly 1 1/2 hours).  You can tear the leaves off the stems while they are still fresh, but we found it easier to put the whole leaves and stems together in the dehydrator and then the brittle leaves break away from the stem effortlessly once dry.  The drying process neutralizes the sting, so it’s safe to handle stinging nettles without gloves once dried.  Discard the stems.

When you’re ready to make nettle tea, just steep them in hot water as you would tea leaves (or use a french press, as we have here).  And, for the record, nettle tea with a teaspoon of yuzu marmalade is to die for.