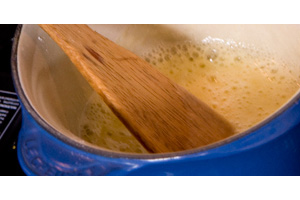 What is Roux?
Roux (pronounced “roo”) is a classic French mixture of cooked fat and flour used by chefs as a sauce/soup/stew thickener.

Though the most common fat used is butter, you could also use rendered duck fat or any rendered fat from bacon, pancetta, duck breasts, goose breasts, and other fatty cuts of meat.

Traditionally equal parts fat and flour (by weight) are used, though if you’re making a roux from pan drippings/rendered fat you’ll likely have to eyeball it and just add flour, stirring, until a very thin paste/wet sand consistency has been reached.  Bread flour is the most common choice, although you can use other varieties.

The Four Stages of Roux:
The longer a roux cooks, the more the starch granules are toasted and the darker it becomes.  Toasting starch increases its nutty flavor, but decreases its thickening ability.

White Roux: Cooked over medium heat. Neutral flavor and strong thickening power.
Blond Roux: Cooked to blond/light brown over medium heat.  Slightly stronger, nutty flavor with slightly weaker thickening power.
Brown Roux: Cooked over low heat to a darker brown color…think brown gravy.  1/3rd the thickening power of white roux, but with a rich, toasty flavor.  For very dark brown roux, you should first toast the dry flour in the oven until dark brown, then make the roux.
Black Roux: Black roux is also known as burnt roux or ruined roux.  Time to throw it out.  It won’t thicken your dish, and will instead impart a nasty bitter flavor and oil-slick like consistency.

1. Melt butter in saucepan on low.

2. Once the butter is melted, add the flour.

4. Cook for a few minutes (just until the mixture doesn’t taste like flour…it should smell a little like baking pie crust) for white roux.

5a. For blond roux, keep cooking, stirring occasionally, until the mixture becomes a blond/light brown color.

5b. For brown roux, reduce the heat to low and slowly cook until the mixture is a darker brown.

7.  Bring the mixture just to a boil, then reduce to a simmer.  Simmer for 10 to 20 minutes (until thickened).

How Much Roux to Use:
Use about 1 parts (by weight) white/blond roux to thicken 10 parts sauce in order to reach a consistency that will coat the back of a spoon.  You’ll need to use more brown roux (perhaps as much as 1 part roux to 3 parts sauce) to achieve the same consistency.