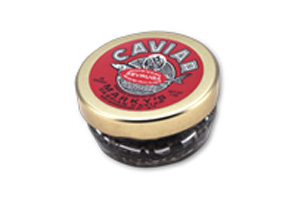 The queen of caviars, sturgeon caviar is available either farmed or wild, and from four main varieties of sturgeon: Beluga, Sevruga, Hackleback, and Osetra. Despite its reputation for being exclusive and expensive, caviar is available in wide variety of options at several different price levels. 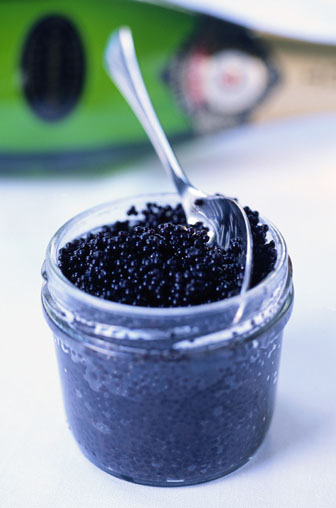 Though beluga caviar is usually assumed to be the best because it is the most expensive, many caviar aficionados consider the Beluga, Osetra, and Sevruga to be roughly equal in quality…just different in their characteristics. The main reason beluga caviar is so expensive is that beluga sturgeon are so rare they are now on the endangered species list. (It takes 25 years for a female beluga to mature to egg-laying age…and even then, they don’t spawn every year.)

The smallest and most abundant (relatively speaking) of the wild caviar sturgeons, sevruga produce small black eggs with the most potent sturgeon caviar flavor…smooth and buttery. Paddlefish Caviar is widely considered an affordable non-sturgeon substitute for sevruga eggs.

The flavor, color, and size of osetra sturgeon eggs (aka Oscietre Caviar) can vary wildly depending on how the fish was raised, what it ate, and where it came from. Wild Osetra Caviar, is considered the gold standard, with medium-sized brown eggs that possess a crisp, nutty & sweet flavor. However, many farmed varieties are available:

Hackleback Caviar (aka American Sturgeon Caviar, Shovelnose Caviar) is American wild caviar harvested from the hackleback sturgeon. Hackleback caviar has firm, black eggs and an intensely nutty flavor. It is the most affordable variety of sturgeon caviar available.

The term describes a style of caviar from any fish that has been more lightly salted than is common (2.8-3 percent instead of 3.5-4 percent), allowing the flavor of the fish eggs to be more pronounced. Traditionally, only the highest grade of roe is used for Malossol caviar. Malossol-style caviar is a connoisseur favorite, so much so in fact that the word “Malossol” is sometimes used to refer to any very high-quality caviar.

Pasteurized sturgeon caviar has been lightly cooked to sterilize it and is shelf stable for up to a year. It should taste the same but will have firmer eggs than fresh caviar.

Pressing caviar preserves it for a longer time. Caviar was widely consumed in this before the 20th century. Due to the introduction of better refrigeration and transport methods, it has become rather rare today, and is usually only made from damaged or over/under-ripened eggs. It has a very strong salty-fishy taste.

Sterlet caviar was harvested from Sterlet sturgeon, now the absolute rarest of the Russian/European sturgeon varieties (even more than Beluga). Because they’re almost extinct and highly protected—they are an important crossbreeding stock--their eggs are not available for sale.