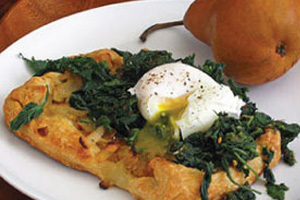 “Look up in the sky it’s a bird, it’s a plane, no it’s a nettle defying super hero named Sup!”  (for our readers who don’t know him yet, Sup is shorthand for Greg from Sippity Sup, who has some consistently delicious content)

That’s right I am here to rescue you from your fear of stinging nettles!

Stinging nettles—also known as Urtica dioica if you speak Latin – can be a bit fearful. You are probably familiar with the stinging nettle. If you have ever gone for a stroll in the woods you may have been attacked by a stand of them. They can be evil super villains! Because just brushing up against them in the wild will cause a painful stinging sensation and an itchy reaction that can last several days.

I was recently sent a bunch of them by Justin at Marx Foods as a promotional challenge. Well, I may not actually be a super hero, but I tend to think that I am endowed with a few super powers, so a challenge like this does not go unmet in my kitchen.

So to show you my (near super hero) super human strength I plan on putting these stinging nettles in my mouth. I will then chew them and swallow them!

Now don’t gasp in awe… it doesn’t mean I am crazy. Because let me tell you, all this super human strength I posses needs a super food to maintain its prowess, and stinging nettles are indeed a super food worthy of a (near) super hero named Sup!

Did you know that nettles contain the highest possible plant source of iron? Sup! needs iron to thrive. They are also an EXCELLENT source of other vitamins, minerals and protein as well. In fact nettles are very dense, nutritionally speaking, for having so few calories.

They also contain sulfur, which is great for the hair, skin, and nails. How do you think this (near) super hero maintains his good looks?

In addition the tiny stinging hairs, besides emitting the histamine that causes the reaction, also release serotonin and acetylcholine. These two neurotransmitters can help suppress the appetite and even stabilize the dark emotional outlook of a moody (near) super hero. Finally, nettles have gentle diuretic properties, which help relieve water weight gain, flush the body of toxins, and purify the blood. They also make Sup! pee a lot. But that’s another story.

So, at first glace it may seem that Justin sent me a noxious weed– an evil noxious weed. But I know how to tame these nettles and bring out their gentle nutty flavor. Because make no mistake nettles are a super food and have been recognized as such for centuries. Sup! is not the first man to put them in his mouth and swallow them.

My man Euell Gibbons (an authority on wild foods) offered this highest of superlatives to the stinging nettle: “This detested weed is one of the finest and most nutritious foods in the whole plant kingdom. Unlike many health foods, nettle greens are really good, as well as being good for you.”

There’s a reason Mr. Gibbons was a 1970s cereal commercial (near) super hero. He knows what he’s talking about. Nettles really are a tasty little green. And they are the greenest of the greens too.

However, I’ll let you in on a little secret. You need not be a (near) super hero to subjugate the sting of this green. Nope, you just need to know how to boil water. Because a few seconds submerged in a pot of the stuff de-stings those little stingers. Leaving you with a pile of veg that is no more intimidating than a cucumber. You’re not afraid of cucumbers are you? Should I have said apples? Nobody is afraid of apples. Right? So let’s go with apples.

But even super foods need to be super delicious at Sup’s! house. So to meet this challenge I am making a flaky Sweet Onion Tart with Nettle, Sorrel & Poached Egg.

I don’t need to tell you that those sweet onions all snuggled up to the nutty, wild green flavor of nettle and the bright notes of sour sorrel will absolutely purr like domesticated cougars when I plop that perfectly oozy, yellow yolked ouverous beauty right on top.

They don’t call me Super Sup! for nothin’…

Add the nettles to the sorrel and set them aside. Heat the olive oil in a large sauté pan set over medium-high heat. Add the shallots and cook, stirring about 3 minutes until they have softened somewhat. Add the garlic and cook another minute of two. Add all the greens to the pan along with the chicken stock. Stew the greens about 20 minutes, stirring often, until the moisture has nearly evaporated. Turn off the heat and set them aside.

Preheat oven to 400 degrees F. Lay one sheet of the store-bought puff pastry on the counter in front of you. Sprinkle evenly with 1/4 t dried marjoram. Lay the other sheet on top. Roll both sheets together into a rough 16×16 inch square. Cut this into 4 roughly 8×8 inch squares. Rustic shapes are just fine. Move the squares to two parchment lined baking sheets and refrigerate.

Melt the butter in a large saute pan set over over medium-high heat. Add the onion and a few pinches of salt. Cook the onion, stirring often, about 3 minutes. Then continue to cook them, undisturbed, until they begin to brown on the edges. Stir the onions and cook another few moments undisturbed to further brown the onions now in contact with the bottom of the pan. Reduce the heat to low and add the bay leaf, red pepper flakes if using and the remaining marjoram. Continue cooking, stirring often, until the onions are lightly golden, about 15-20 more minutes. Remove bay leaf and adjust seasoning.

Take the rolled out squares of dough from the refrigerator. Divide the onion mixture evenly between the dough squares leaving a 1-inch or so border. Fold these borders over themselves creating a raised edge. Crimp the dough all around to assure a good seal. Sprinkle the edges of the dough with a little additional salt.

Bake until the crust is golden brown about 35 minutes.

To serve. Heat the greens over medium heat, stirring often. At the same time bring a pot of water to a simmer over medium heat. Add the vinegar to the water. Crack an egg, keeping the yolk in tact, and carefully pour it into a small ramekin. Dip the ramekin into the simmering water allowing some of the water into the ramekin. Once the egg begins to whiten carefully pour it into the hot water. Use a spoon to gently roll the egg in the water before allowing it to settle to the bottom. Repeat with the other 3 eggs. Cook them 3 minutes and no more. Using a slotted spoon carefully move the eggs to a heated plate.

Top each onion tart with a fair amount of the greens, followed by one poached egg per tart. Sprinkle with pepper and serve warm.