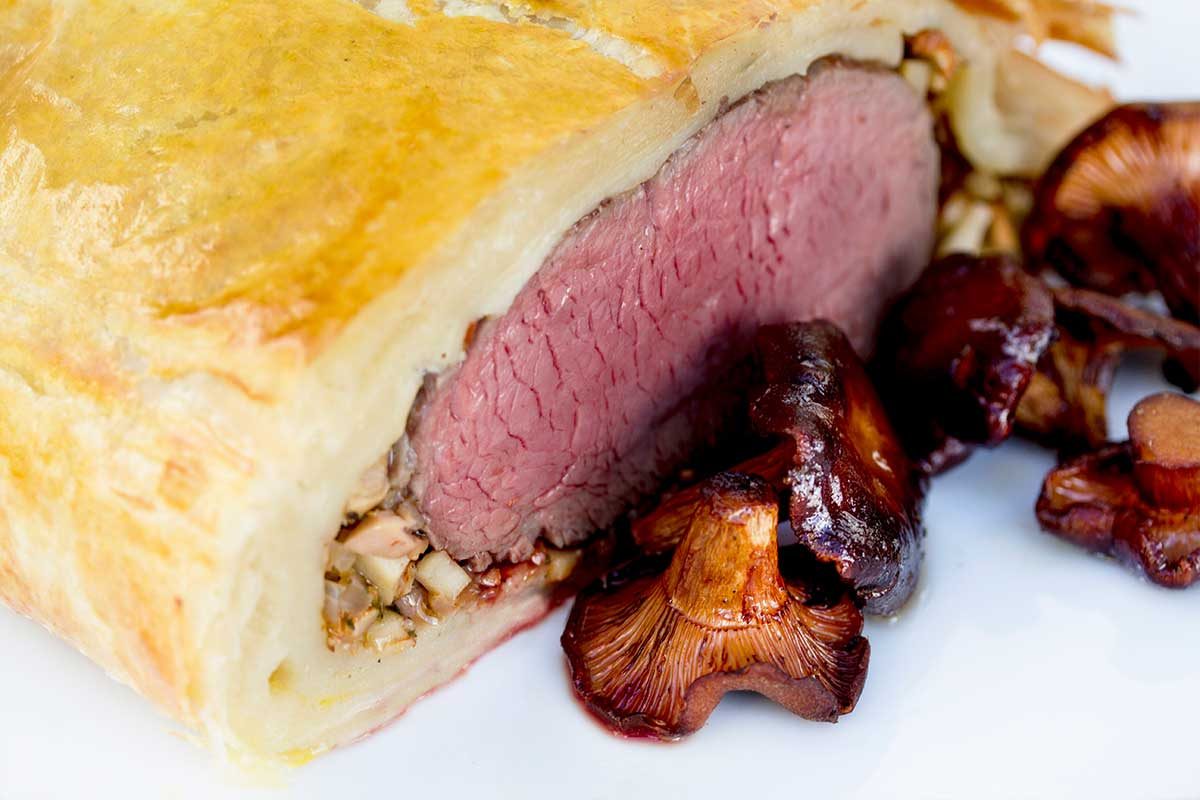 Beef Wellington is a classic, legendary beef roast – tenderloin crusted with mushrooms and shallots, when wrapped in buttery puff pastry & roasted until the outside is golden brown and crispy while the inside is perfectly cooked. Here’s our recipe. 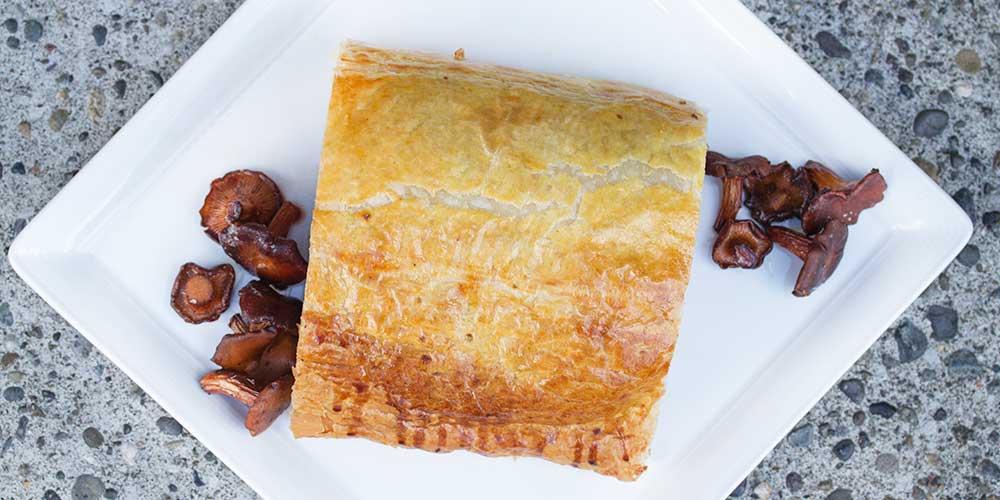 Make the Duxelles:
1
Scrape the stems of the chanterelles with a knife to remove a thin layer of the outer skin. Trim off the bottom of each stem.
2
Dice the lobster mushrooms and chanterelles into small cubes/pieces (roughly brunoise size).
3
Sweat the shallots and lobster mushrooms in the butter with the salt & pepper
4
When the pan is starting to look dry (about five minutes), add 2 tbsp the white wine.
5
When the lobster mushrooms are about halfway cooked through, add the chanterelle pieces.
6
When the pan starts to look dry again, add the remaining 2 tbsp of white wine, the thyme, and the marjoram.
7
Continue to cook until the pan looks dry, but before the mushrooms start to burn.
8
Remove the duxelles from the pan to a bowl, put them in the refrigerator until well chilled.
9
Deglaze the pan with 1 tbsp of red wine and save it (with the wine from the roast-searing pan) for making the sauce later.
Clean the Tenderloin:
10
Remove the chain, a long, thin side muscle that runs along the length of ¾ of the tenderloin. This is great meat, so don’t throw it out! Trim off its fat & silverskin and use it for stir fry, etc.
11
Remove the silverskin from the surface of the tenderloin (how to remove silverskin), along with any membranes on the surface.
12
Peel away some of the side-muscle at the top/head (thicker part) of the tenderloin, enough to expose the silver skin that’s in the pocket between the two muscles. Remove it.
13
Flip the tenderloin and trim the fat that’s in the pocket between the head/top of the tenderloin and the side muscle.
Turn the tenderloin into two equivalent roasts
14
Cut the tenderloin in half just below where the head starts to thin. You should have two pieces of equivalent mass.
15
Cut the long tail portion of the tenderloin into two pieces, and press them together side by side, so the thinnest portion is up against the widest portion of the tail. Tie those two pieces together with butcher’s twine.
16
You should now have two tenderloin roasts of roughly similar size & shape. Tie the whole portion of the head of the tenderloin, so the side muscle is pulled in tightly and it looks similar to the other tied roast.
17
Season the roasts on all sides with salt & pepper, then sear them in a hot oiled pan or skillet until they develop a brown crust on all sides.
18
Remove the roasts from the pan & put them in the refrigerator to chill (you do not need to cover them). Drain the excess fat from the pan.
19
Deglaze the pan with the cup of red wine, scraping browned bits off of the bottom.
20
Pour this red wine mixture out of the pan and reserve for later use.
21
Thaw the puff pastry (overnight in the refrigerator or on your counter in about 30 minutes).
22
Preheat your oven to 350˚F.
23
Beat the egg yolk and mix it with two tsp of water (to create egg wash).
24
Cut the butcher’s twine off the tenderloin roasts.
25
Cover a baking sheet with a piece of parchment paper.
Wrap one of the roasts:
26
Gently unfold two sheets of the puff pastry. Glue one end of each to the other to make one long sheet: brush half of one sheet’s panel with egg wash and overlay it with one panel of the other sheet.
27
Cover most of this puff pastry sheet with a layer of duxelles, leaving the end panel without any. Brush that panel with egg wash.
28
Put one of the tenderloin toasts on the duxelles – so the seam of the pastry is on the bottom. Roll the puff pastry sheet around it, closing the roll with the egg washed side.
29
Put the covered Wellington roast on the parchment paper (again with the seam between the two sheets on the bottom). Brush the top of the puff pastry with egg wash.
30
Repeat with the other tenderloin roast.
31
Optional: move the baking sheet to the fridge to chill the roasts until you need them.
32
Roast the Wellingtons in your oven until they’re cooked to medium rare (about 30 minutes).
33
Remove the roasts from the oven and let them rest for about 30 minutes before slicing.
34
While the roasts are resting, pour the reserved wine & pan drippings into a small saucepan. Add the butter and whisk until a sauce forms.
35
Slice & serve the beef Wellington with the red wine sauce.
Browse More:
Grass-Fed Beef Recipes
Roast Recipes
Wild Mushroom Recipes