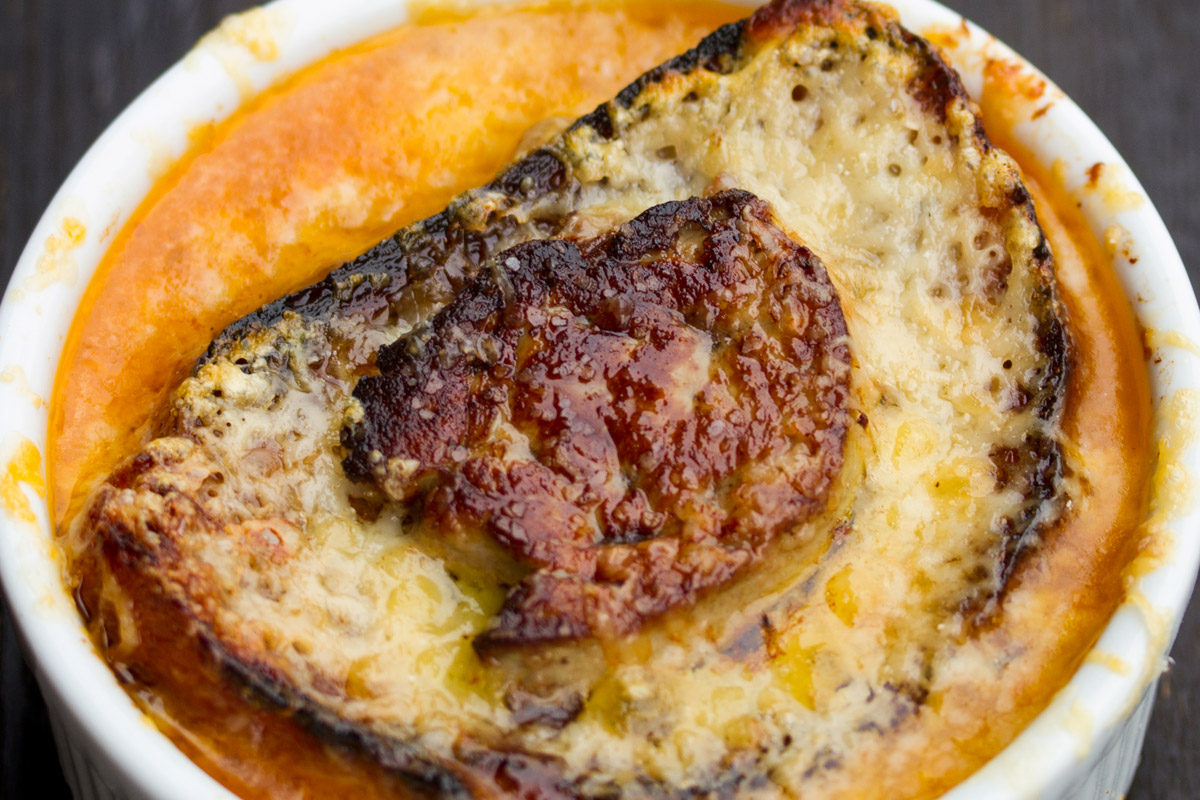 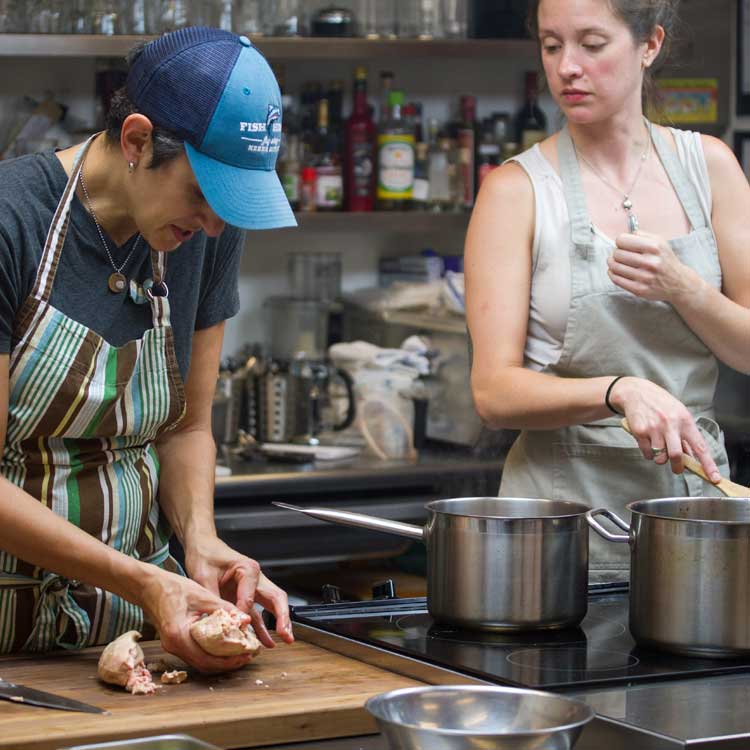 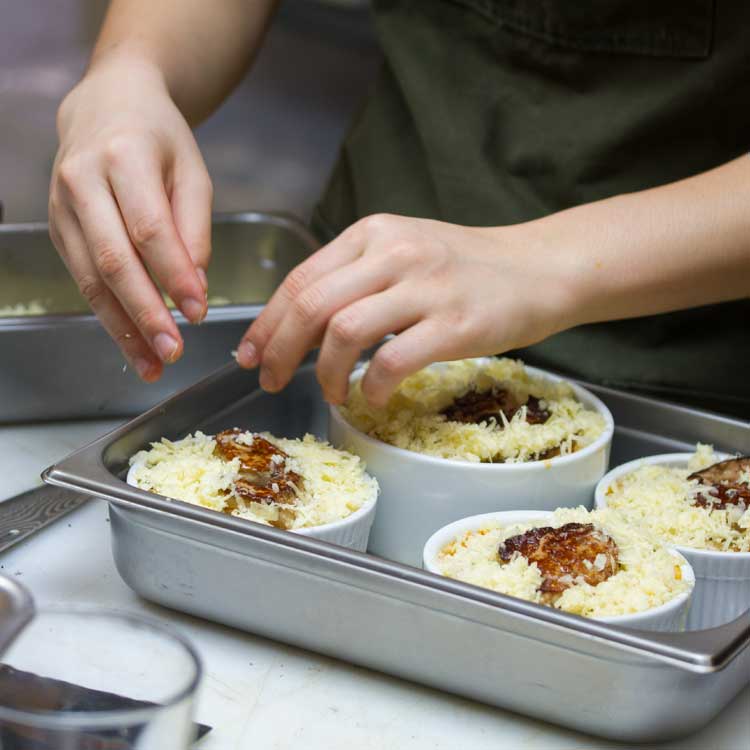 French onion soup is famous for its deep savory-sweet flavor and perfect pairing with creamy gruyere cheese. Here we’ve given it a fine dining upgrade by sneaking in wild porcini mushrooms for extra umami and foie gras for extra richness.

We used B grade foie gras in this recipe because it’s more affordable and its less sweet flavor is fine with the big flavors in the soup. Of course, this recipe is also a great way to make use of leftover grade A foie gras, which will make it taste even better. 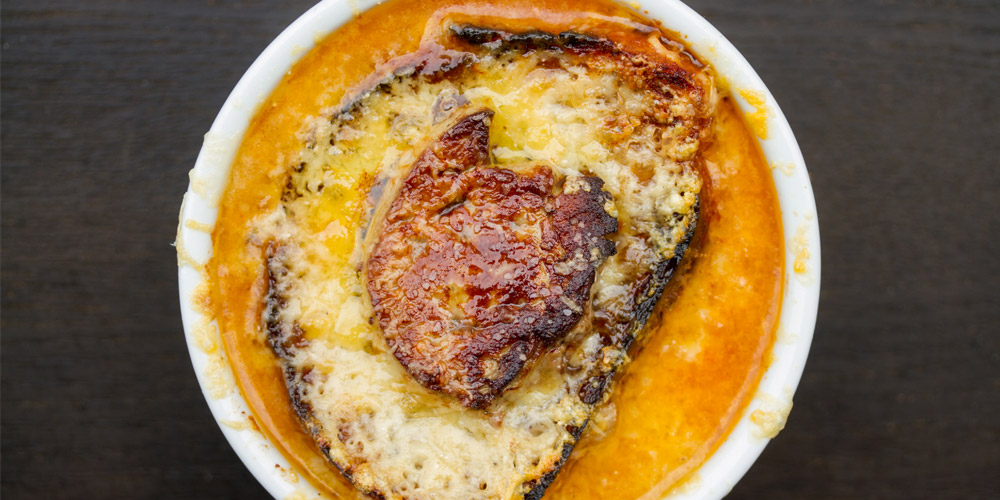 1
Rehydrate the porcini mushrooms in ½ cup boiling water (how to rehydrate mushrooms).
2
Mince the rehydrated mushrooms. Strain the soaking liquid & reserve it.
3
Peel the onions & thinly slice them lengthwise into ¼” thick half-moons.
4
Melt the 2 tbsp of butter in a deep stock pot over medium-low heat. Add the onions, pepper & salt, then slowly caramelize the slices, stirring occasionally (how to caramelize onions). If the onions begin to stick to the bottom, stir in up to ½ cup of water.
5
After about 15 minutes, when the onions start to brown, stir in the tomato paste. Continue to cook, stirring occasionally and adding water if necessary, until the onions turn a dark brown (about another 15-25 minutes).
6
Combine the porcini soaking liquid and the vermouth. Deglaze the onion pan with this mixture. Simmer until the liquid evaporates.
7
Add the beef stock/bouillon. Bring the liquid to a boil, then reduce the heat to a simmer. Simmer, with the lid off the pot, for a half hour, stirring occasionally.
8
Stir in the brandy and sherry vinegar. Taste, and add additional salt if necessary (though leave it slightly less salty than you prefer to account for the saltiness of the gruyere).
1
If it isn’t already soft enough to spread, use your knife to scrape the ¼ cup of foie gras into a paste. Spread it across the middle of the bread slices, leaving the edges bare.
2
Broil the bread slices, just until the bread is crisped.
3
Sear the foie slices in a dry pan over high heat, just until that side is browned. Flip each slice for just a few seconds, then immediately remove them from the pan.

Save the rendered fat for dressings (replacing the oil), roasting potatoes, etc.

4
Ladle the soup into ramekins until it comes most of the way up to the top.
5
Put a piece of toast on each ramekin of soup. Top each piece with a slice of foie (seared-side up).
6
Sprinkle the remainder of the top of the ramekin (toast, soup, everything that isn’t foie) with the gruyere.
7
Broil each ramekin in the oven, just until the cheese melts. Serve.
Browse More:
Foie Gras Recipes