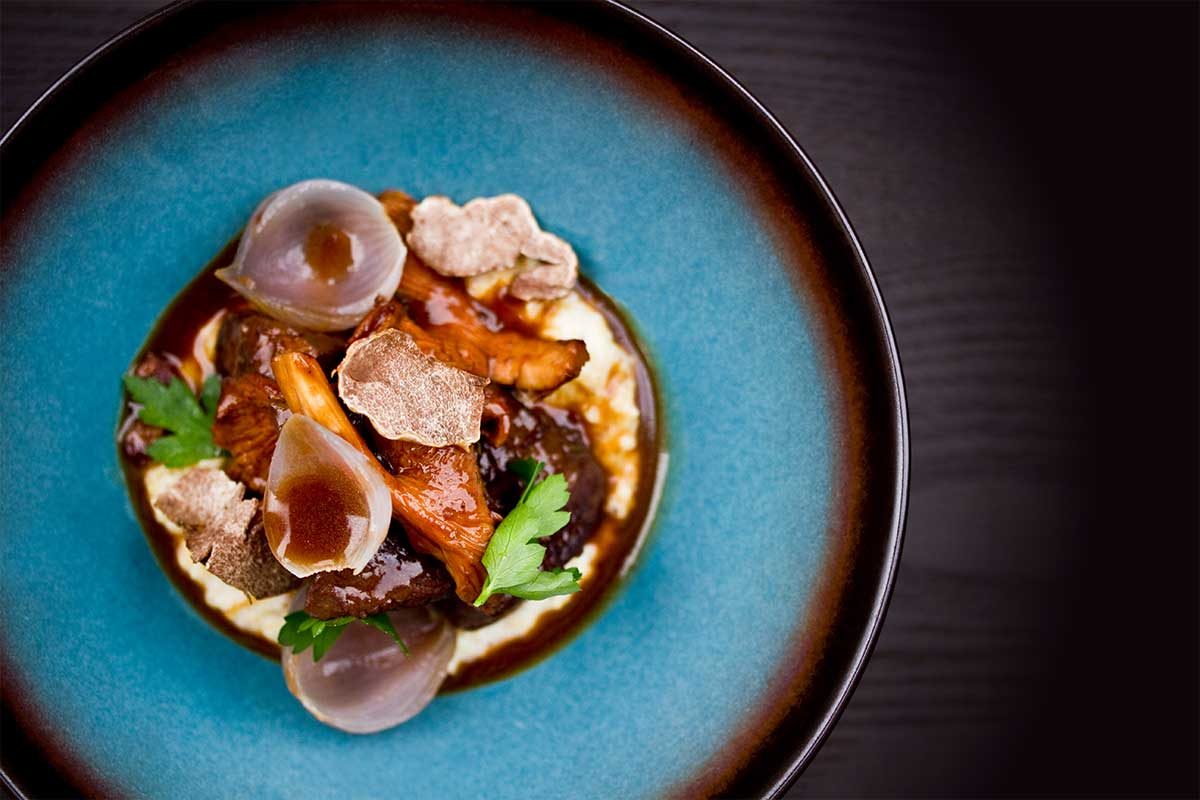 We can’t deny this looks pretty complicated for a stew recipe…but the results are worth it. By removing the cooked carrots, celery and onion after cooking, and then adding separately-cooked fresh chanterelle mushrooms and pearl onions, you get a far more beautiful, cleaner tasting result. 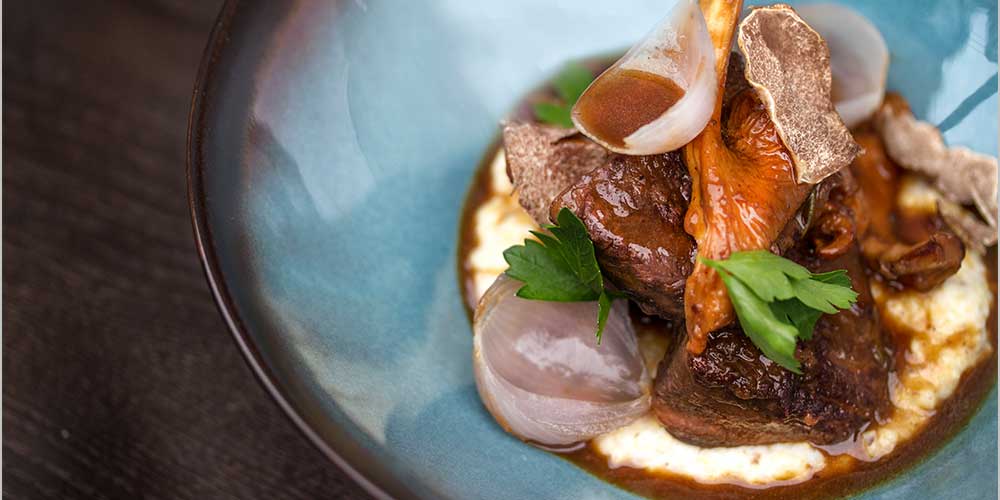 1
Preheat your oven to 300 degrees.
2
Brush any dirt off of the chanterelles & trim off the ends. Pull them down the middle into long strips.
3
Over medium heat on the stove top, heat 1 tbsp of olive oil in an enamel cast iron or cast iron dutch oven.
4
Add the bacon to the pan & sweat it to render out the fat without crisping it. Remove & reserve the bacon.
5
Dry off the stew meat. Toss it with salt and pepper and just enough flour to coat.
6
Add the stew meat to the dutch oven and sear it on all sides. To keep the pan hot and get a good sear, you’ll likely want to sear the meat in stages to avoid crowding the pan (we used a second pan to save time). As each batch finishes searing, remove it from the pan to make room for the next batch.
7
Add the rosemary sprig to the pan while searing the last batch of beef.
8
Drain off the excess fat. Remove & reserve the rosemary & beef. Deglaze the pan with the 1/2 cup of brandy (if cooking over open flame, measure the brandy out into a separate container first, rather than pouring from the bottle for safety’s sake).
9
Reduce the brandy slightly, then return the beef, rosemary and bacon to the pan. Add the red wine, 1 cup of the beef stock and increase the heat to bring the mixture to a simmer.
10
Make a bouquet garni of the fresh sage, thyme and parsley, either tied together or wrapped in cheesecloth. Add the bouquet, onion, celery and carrots to the pan along with a small amount of salt & pepper.
11
Once the liquid is simmering, cover with the lid & transfer to the oven for about 2 hours (check after 1 1/2 hours), until the meat is tender. Kobe stew meat seems to cook faster than conventional beef stew meat.
12
While the stew is cooking, put the pearl onions to a small pot of cold water and bring it just to a rolling boil, stirring occasionally to dunk the onions. Pour off the water and let the onions cool. Peel them.
13
Once the stew meat is tender, remove it from the oven and take out all the vegetables and herbs. Strain the liquid into a saucepan using a fine mesh strainer or chinois (reserve the meat). Taste & add additional salt as needed.
14
Stir in the demi glace & a glug of brandy, plus extra beef stock if needed to get the consistency you want (you want the liquid to be thick, but not syrupy). Return the beef to the broth.
15
Heat 1 tbsp of olive oil in a frying pan until smoking, then add 1 tbsp butter. Cook the whole chanterelles in batches over high heat, ensuring they’re well caramelized.
16
In a separate saucepan over medium heat, combine 5 tbsp butter, 1 cup beef stock, sugar, whiskey and a pinch of salt. Add the peeled pearl onions, and cook, basting occasionally, until tender.
17
Add the chanterelles, the pearl onions (leave their cooking liquid behind), and another tbsp of brandy to the stew pan. Heat the pan to warm the stew meat through, basting with the liquid.
18
Serve atop white truffle polenta or another starch of your choice.
Browse More:
Stew Meat Recipes
Chanterelle Recipes
Kobe Beef Recipes