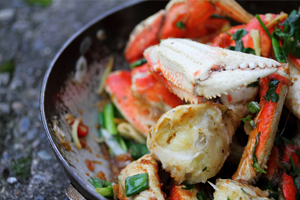 Pick a crab variety based on your budget, flavor preferences and how you’re planning on eating it. Here are some general guidelines to help you decide.

1. More Shell = Lower Price
Crab is very labor intensive to remove from its shell. Because of this, the more work you’re willing to do at home, the cheaper the price. Pre-picked crab meat is incredibly convenient, but is generally more expensive.

On the other hand, when you buy shell-on crab you’re also paying for shell weight in the per pound price and overnight shipping cost, so the disparity isn’t quite as huge as it first appears.

2. Demand Dictates Price
Crab is a big restaurant seller. People like to eat it when they splurge for special occasions and don’t have to worry about cleaning up. Thus, the more desirable a crab species is to the restaurant industry, the higher the price is going to be. Of course, chefs are also professional experts on what tastes good, so cost is also a good indicator of the perceived quality of the species.

For many crab species claw meat (if any) and leg meat is considered better than body meat due to appearance (whole lumps) and texture (less stringy). That said, body meat is still very, very tasty, and can be cheaper.

Dungeness Crabs:
Dungeness crabs are a West Coast favorite known for their tasty, very sweet meat. They have thinner, smaller legs than King and Snow crabs.

More Info:
How to Clean a Dungeness Crab

Jonah Crabs:
Jonah crabs are one of the smallest crab varieties eaten in the US. Jonah crabs are a larger but less sweet alternative to that new chef favorite, the Peekytoe crab. Jonah crab claws are often sold as “cocktail” claws – most of the shell is removed for easy access to the meat.

King Crabs:
The largest and most desirable of the crabs commonly consumed in the US, king crabs are harvested in the North Pacific and Bering Sea. They are prized for their sweet, tender leg meat that can be removed in large, impressive pieces.

Peekytoe Crabs:
Likely the smallest of the crabs commonly eaten in the US, peekytoe crabs (aka Atlantic rock crabs, bay crabs, picky-toe crabs) get their unusual name from the way the tips of their feet angle inward. Until recently they were relatively unknown in restaurants, but they’re fast becoming popular in the fine-dining scene because of their meat’s clean, sweet flavor, delicate texture, and pinkish color.

Because these crabs are so small, with correspondingly tiny claws, they are generally only sold as meat.

Snow Crabs:
Like king crabs, snow crabs have very long legs that provide a lot of their meat. Snow crab meat is quite tasty, but is considered a little more fibrous than king crab meat. Their legs are thinner and less impressive than king crabs’. This makes them less popular with restaurants and thus more affordable for you.

Snow crab legs are commonly sold as clusters – groups of legs attached to a portion of the body (which also contains tasty body meat). Snow crab claws are small, just the right size for a bite or two. They’re commonly sold with part of the shell already removed, making it easy to pick out the tasty nugget of crabmeat inside. The pincers are left on for a more elegant look, and they can be used as a handle for dipping the meat.

Florida Stone Crabs:
Stone crabs have very large claws that they use to crush mollusk shells (their diet consists primarily of clams, scallops and conchs). To ensure a sustainable harvest, only the claws can be sold. Since the claws regenerate, the crabs are caught, one claw is removed, and the crab is returned to the ocean to regenerate its claw. Sold fresh and pre-cooked, these claws offer sweet, succulent meat in a visually impressive package (their shells are beautiful yellow-pink with striking dark black tips).

Though they can be sautéed or steamed, stone crab claws are best served chilled.

Blue Crabs:
Blue crabs are a one of the smaller varieties and harvested on the East Coast (where they’re quite popular). Away from the coast they’re commonly found as frozen crab meat. However they’re also the species of choice for an American seafood delicacy – the soft shell crab.

Soft shell crabs have recently discarded their shell. After molting, there is a short window (about a day) when their new shell has not yet hardened and is paper-thin. Soft shell crabs are almost completely edible, and need only have a few parts removed to be ready to eat.

More Info:
How to Clean a Soft Shell Crab