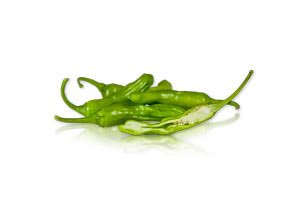 Given the wide selection of options in our Dried Bulk Chilies section, we thought it would be a good to list each chili in terms of its heat level and flavor to help you decide between them.

The Scoville Scale:
The Scoville heat scale (developed in 1912) is the oldest and most commonly referenced method of measuring pepper heat. The testing method is actually pretty simple: a panel of five or more judges is subjected to a taste test featuring the paste form of each pepper that has been diluted with sugar syrup. The degree of dilution required for the judges not to detect any capsaicin in the mixture determines each pepper’s rating on the scale. Despite its inherent subjectivity, this scale is still a useful way of ranking peppers relative to other peppers.

Capsaicin is the naturally occurring molecule in chili peppers (likely evolved to deter mammals from eating them) that causes a burning sensation when it comes into contact with any tissue. Recent biological studies have demonstrated that it also actually activates heat receptors in the human mouth (just as menthol activates cold receptors).

One of the easiest ways to tone down a chile pepper is by removing the seeds and inner ribs. This will significantly decrease the total capsaicin level of the pepper.