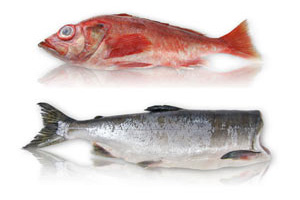 Whole/In The Round: Whole fish or fish “in the round” are being sold completely intact, exactly as they were caught.

Drawn/Gutted: Drawn fish are whole fish that have been gutted…i.e. had their viscera (stomach, roe sacks, other guts) removed. Gutted/Drawn fish generally last longer than fish that are 100% Whole/In The Round, because the guts spoil faster than the meat.

Headed & Gutted (aka H&G): Headed & gutted fish have had their viscera (guts) and head removed.

Dressed: Dressed fish have had their viscera, head, tail, and fins removed. They have also been de-scaled.

Bullets: Head, tail, fins, other pieces and viscera removed, with the skin on. This term is generally used instead of “dressed” for sturgeon, because they have particularly unusual anatomy requiring more cleaning and the end product is a bit different.

Portioned Sturgeon fillets are generally considered more consumer-friendly than bullets because they are much smaller and can be cooked similarly to other fish fillets.

Steaks: Steaks are portions of fish that have been cut across the body rather than along the sides. Often, but not always, they include a section of backbone.

Fillets: Fish fillets are cut along the entire side of the fish, removing the meat from the spine and most of the bones.

Cheeks: Some large fish have portions of meat on their heads, separate from the fillet, that are of sufficient quality to be harvested and sold separately.

The below terms are most often applied to fish fillets.

Skin On: The fish skin is left on the portions. Skin on fish fillets & fillet portions are often used in pan seared fish recipes, so the skin crisps up, providing an attractive texture and presentation. If desired, you can remove the skin from skin-on fillets after you buy them. See how to remove fish skin for the basic technique.

Skinless/Skin Off: Skin removed prior to sale. Whether to leave round fish skin on is often a question of personal preference, the species being used, and the recipe being used. Flatfish skin is very leathery and generally considered inedible.

Pin Bones Out (aka PBO): Many fish fillets have small, thin, flexible bones distributed along the side of the fillet. Generally these are removed (usually with a pair of tweezers) prior to cooking and serving the fish. “Pin Bone Out” fillets have already had the pin bones removed for you.

Frozen At Sea (FAS): Is a term for fish or fish portions that have been frozen within hours (usually 5 or 6 hours) of the fish being caught. The fish are cleaned, processed, and frozen on the vessel that caught them.

Frozen at sea fish has a reputation for being much higher quality than fish frozen much later, and even some fresh fish depending on how long it has been out of the water.

In addition, FAS fish may be more environmentally sustainable because it can be transported more slowly than fresh fish (and thus usually using lower-carbon methods – i.e. trains instead of jets).

See Can Chefs Cozy Up to Frozen Fish? (Washington Post, 2008) for more info about FAS fish.

Post Written by Matthew Johnson
__________
Browse More:
A Guide to Types of Fish & How to Cook Them
Culinary Tips & Techniques
Seafood Recipes